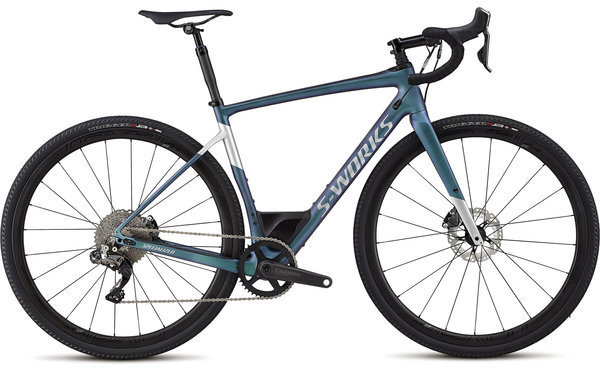 While the fun may begin where the road ends, you still need a bike that'll get you there—one bike that shreds singletrack and crushes through road miles with equal expertise. Sure, some have tried to make their 'cross bikes more "road-capable" (whatever that means), and others have made their road bikes more "adventure-ready," but we created one bike that makes no compromises between the two. The S-Works Diverge redefines the possibilities for adventure on a drop-bar-bike.

The S-Works Diverge frame will comfortably fit up to 700x42mm tires with plenty of room for mud, too. Weight was a large factor in the development, so Specialized took some design cues from the Roubaix with a sub 900-gram FACT 11r carbon frame that's one of the lightest in the category. Actually, it's pretty damn light, even if your intent was more Polka Dot Jersey than hunter's plaid flannel.

Specialized opted for a new Open Road Geometry. We know what you're thinking, "it's just another marketing term," but they truly did develop an entirely new geometry. Think of it as a road version of modern trail bike geometry. It provides playful handling and predictable steering for endless dirt skids and mid-corner drifts. The geo features a bottom bracket that's over a half-centimeter lower than the previous Diverge, a slacked-out head tube angle, short chainstays, and a short wheelbase. These changes make for a bike that's not only fun in the dirt, but also performs well on the road.

There's only so much that wider tires with lower pressures can absorb, so Specialized implemented a new version of the Future Shock into the Diverge design. It not only soaks up bumps with ease, but provides extremely predictable handling. That's because the wheelbase isn't lengthening when you hit a bump, so the front end of the Diverge keeps the same effective head tube angle. In other words, when you dive hard into a turn, you won't be surprised by under steer or sloppy handling. Unlike the original Future Shock, the Diverge's version features a progressive spring that makes this technology more suitable for off-road applications, where stiffer suspension is often needed to soak-up larger bumps and obstacles.

Specialized topped it off with three water bottle mounts, mounts for racks and fenders, and their Road SWAT kit that fits a tube, CO2, CO2 head, valve extender, and money clip. So while it's one of the most smile-inducing bikes you'll ever ride, it's equally adept at commuting or even bikepacking.

For the S-Works Diverge, they handpicked the spec for the lightest, most unique build on an adventure bike. They left the shifting and braking up to Shimano, but did so in a non-traditional way. Specialized paired an XTR Di2 derailleur with R785 Di2 shifters and hydraulic-disc brakes. Then they added an Easton EC90 SL Carbon crankset, featherweight Roval CLX 32 Disc wheels, and topped it off with their carbon Command Post XCP that features 35mm of travel.

Electronic drivetrain systems deliver excellent shifting, easy set up, and solid battery life. Here are some benefits of electronic shifting that you don't want to miss.

Electronic shifting systems use powerful servo motors to rapidly shift the chain. Because microprocessors and sensors constantly monitor every aspect of the system, they shift with surgical precision and without chain rub.

Many major systems have customizable shifting. Some have the ability to add remote shifters for common riding positions, and some even allow you to change the functions of the shifting buttons.

Electronic groupsets are responsive and consistent. There are no cables to stretch and wear out, so you get a flawless shift every time. The added bonus is you'll never have to replace a derailleur cable ever again.

* Subject to change without notice.