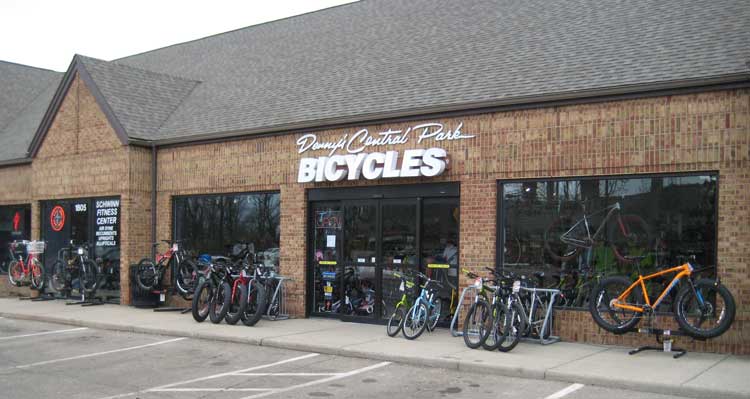 Our family has been meeting Lansing's cycling needs for more than 70 years. With three generations of experience, we can help you and your family find the bikes and accessories that best meet your needs.

Why You Should Shop at Denny's

A Timeline of the Vandecar Family's Lansing Bicycle History

Like many stories, this 60-year saga has an unlikely beginning. In 1942, Max Vandecar is involved in a serious car/tractor accident, which breaks his leg and almost kills him. He is laid up with a cast for a very long time. But you can't keep a good man down and eventually Max removes his own cast and takes it to the local dump. While there, he notices a number of old tricycles and bicycles, which he takes home with him.
Max begins rebuilding and repainting these old cycles and selling them from his home. As he becomes more successful, the city informs him that he cannot continue to sell from his home.

Undeterred, Max rents a small store at 503 E. Shiawasee in Lansing and a bicycle business is born. "Van's Bike Shop" would become a Lansing institution.

Business is good for "Van's Bike Shop" and Max's young son, Denny, begins helping out in the shop after high school each day.

In April, Denny is married and begins working at his father's bicycle shop while trying to decide what to do for a living. Denny's landlord, knowing his background, suggests that he start a bike shop in East Lansing. The town was growing and the MSU students needed bicycles.
Denny's landlord, a real estate man, helps him find a location. With financial help from Max, Denny is selling bikes to students that Fall. "East Lansing Cycle" is open for business at 1215 East Grand River.

"Van's Bike Shop" continues to succeed, with Max being in Schwinn's 500 club regularly. He employs three men in the service department alone. At this point, Max is selling bicycles to senators and even to the governor.
Max's younger son, Gordy, opens "Waverly Cycle" at Waverly and Jolly Road, selling bicycles and motorcycle accessories.

Tragically, Max Vandecar is killed in a tractor accident. His youngest son, Douglas, carries on the business at "Van's Bike Shop".

The young environmental movement is a boon to bicycle sales. In 1973, Denny opens a second store, "Waverly Schwinn" next to "Waverly Cycle", which is now selling only motorcycle accessories.
In 1977, Denny opens "West Saginaw Schwinn".

The East Lansing location and west side stores are renamed "Denny's Schwinn" and a new location on South Cedar also takes that name.
The store on Waverly closes due to the fact that most of its customers are now patronizing the West Saginaw store.
Denny purchases "College Schwinn" in East Lansing from his cousin, Vaughn Vandecar. Located on Harrison Road, this store is also renamed "Denny's Schwinn."
The South Cedar store is eventually closed.
In 1987, the original "Van's Bike Shop" is closed.
In 1989, Denny opens "Raleigh Central Park" at 1805 Central Park Drive in Okemos.

Nationally, the bicycle industry is suffering. America's hallmark bicycle manufacturer, Schwinn, files for bankruptcy in 1992.
The west side, Grand River and Harrison Road stores are renamed "Denny's Cycling and Fitness." In 1997, the Harrison Road store is closed.
In 1991, the Okemos store is renamed "Central Park Bicycles."
In 1999, Denny's son, Jon, purchases the East Lansing store. Denny continues to operate the west side and Okemos stores.

Schwinn files for bankruptcy again. Denny's begins to feature Specialized and Trek bikes, due to the dependability of those companies.
Due to lack of space in downtown East Lansing, Jon closes the East Lansing store after 41 years of business.
Denny consolodates the West Saginaw store and "Central Park Bikes" into the Okemos location, now called "Denny's Central Park Bicycles."

With his son, Dave, at the helm, Denny continues his legacy at the thriving "Denny's Central Park Bicycles" shop in Okemos. This institution is the culmination of decades of devotion, dedication and bicycling passion in Lansing, Michigan.
Selling the most dependable equipment at the best prices, the Vandecars are ready for 60 more years of service to Lansing.